Reviews and recommendations are unbiased and products are independently selected. Postmedia may earn an affiliate commission from purchases made through links on this page.

“We started as a laidback burger and beer joint,” Mo Jessa, president of Earls Kitchen + Bar, says. “When Earls started, there was no other concept in the premium-casual restaurant category. Earls created the category and set the standard in the space.”

Since its start in 1982 by father-son duo Bus and Stan Earl Fuller, the company has evolved to include a more robust and “sophisticated” offering of dishes, paired with an elevated dining ambiance in its nearly 70 restaurants across North America.

“Today the brand has grown to 69 restaurants, with 10 in the U.S., and will continue to grow fast over the next few years,” Jessa says.

The longtime Earls employee — Jessa was a chef at Earls before joining the executive team — cites the restaurant group’s willingness to evolve and adapt as one of the strongest factors behind its steady growth over the past 40 years.

“Earls is one of the most successful, family-owned independent restaurant groups in North America,” Jessa says. “And I think this is largely because Earls is forever changing, and looking at what the guest wants their dining experience to be has been our North Star since Earls opened its doors.

“The menu is designed for how our guests want to eat with a balance of healthy and indulgent dishes such as our sushi tacos, seafood platter and garlic and prawn spaghetti. The dining experience is sophisticated yet approachable and that is why people love coming back to Earls.”

A hearty assemblage of the restaurant’s favourite recipes spanning Los Cabos Chicken Tacos to Vindaloo Curry are on offer in the newly released anniversary edition of Earls The Cookbook: Eat a Little. Eat a Lot. 120 of Your Favourite Recipes.

“Some of Earls’ most iconic dishes from the last 40 years are included in the book,” Jessa says of the hardcover tome.

Featuring 16 new recipes in addition to those published in the cookbook’s previous iteration, first released in 2016, Jessa says the cookbook presented the “perfect way” to showcase the restaurant’s evolution over the past 40 years.

“The original cookbook featured favourites from dishes found at Earls in the ’80s, ’90s and early 2000s,” Jessa says. “The 16 new food and drink recipes focus on the most recent decade, making the 40th edition a true representation of everything Earls has offered throughout our history.

“By showcasing our menu through the decades, it offers our guests a chance to cook their favourite dishes that we no longer have on the menu at home. Additionally, it provides the chance to recognize the contributions of all the people that gave us those recipes. A lot of people who helped make us famous — it is a chance to honour them.”

The new anniversary recipe additions were chosen by the Earls team in an effort to fully encompass the scope of the chain’s menu options over the most recent years.

“We chose our most iconic recipes that represented the last decade that were not currently in the cookbook,” Jessa says. “We wanted a plant-based option, a healthy option, an indulgent option and then considered our guests and what they would be looking to cook at home.

“It was also an opportunity to include more of our iconic drinks.”

Jessa points to diner favourites such as the Hunan Kung Pao, Sante Fe Chicken Salad, Warm Kale Salad and the Mocha Pie, which “are very popular and continue to be guest favourites” as recipe highlights within the new release.

As for Jessa’s own personal pick, the chosen recipe marries chef technique with some tried-and-true comfort food elements — the Grillato Basil Fettuccine.

“When it originally launched on the menu it was so exciting learning new techniques to cook this dish and working with ingredients that were special,” the former Earls chef says. “The Grillato allowed us to create a dish that was unique at the time, with unique flavours.” 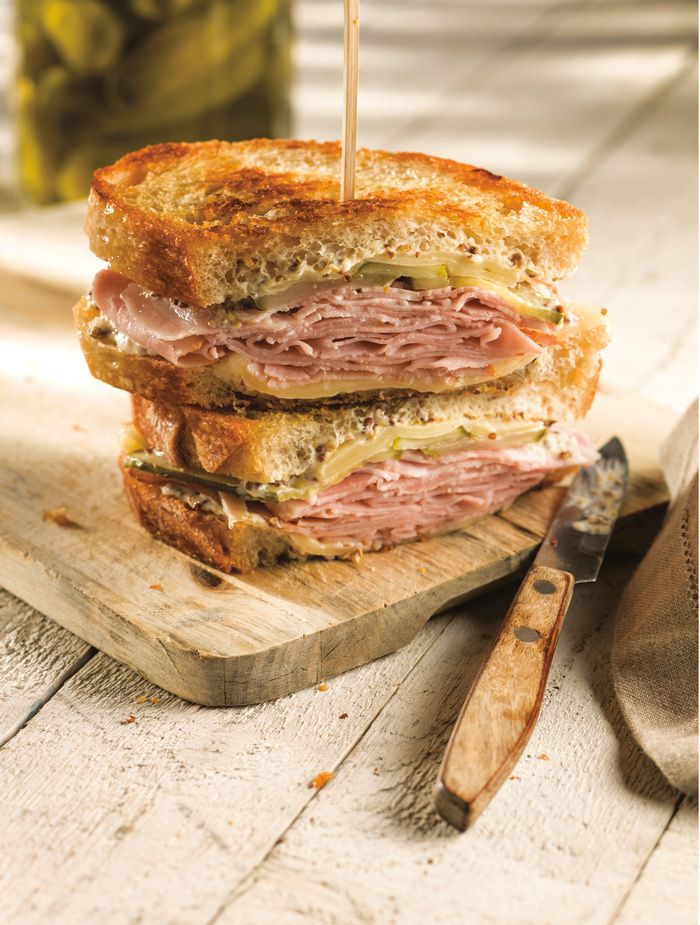 Within the Italian-based slow food movement, porchetta occupies a special place as one of the most classic and delicious yet labour-intensive dishes. A deboned pork loin is arranged with layers of herb stuffing, fat and skin, and then rolled and spit-roasted, traditionally over wood. The porchetta ham called for here is a lightly cured version (for which someone else has already done the work) that can be found in Italian markets and delis. As for the name, Cuban sandwiches combining pork and cheese are common in places like Miami, and time spent there opening our Dadeland location gave Dawn Doucette the inspiration for this sandwich. She countered the sweetness of the porchetta with our sourdough bread, which balances the dish and distances our version from the Florida norm.

Heat the Virginia and porchetta ham in the microwave for 45 seconds or until just warm. This will ensure a thoroughly hot sandwich and cheese that melts nicely. Spread the butter over one side of the sourdough bread. Flip the bread so that the buttered side is facing down.

Arrange the bread so that you have crowns on the top row and heels on the bottom row. Spread 1 tablespoon (15 mL) of mayonnaise on each crown and ½ tablespoon (7.5 mL) of mustard on each heel.

Evenly distribute the sliced cheese over the heels and top with the heated ham, making sure there is even coverage. Place two pickles over each crown and close the sandwiches.

Place the sandwiches on a preheated griddle or nonstick pan. Cook until golden brown on the first side, approximately 3 minutes. Flip and continue cooking until the second side is also golden brown and the cheese is fully melted.

Transfer each sandwich to a plate and serve immediately.

Preheat the oven to 400°F (200°C). Toss the vegetable oil, potatoes and Brussels sprouts together in a large mixing bowl until evenly coated. Place the vegetables on a baking sheet, cut side down.

Bake for approximately 17 minutes. Remove from the oven and drizzle the brown butter vinaigrette evenly over the vegetables. Return to the oven for an additional 3 minutes, or until the potatoes are golden and the vinaigrette is bubbling.

Meanwhile, remove the spine from the kale and slice into bite-sized pieces. Combine the kale, half the Parmesan and the almonds in a large mixing bowl.

Once the vegetables are cooked, remove from the oven and immediately transfer to the mixing bowl with the kale, Parmesan and almonds (be sure to include any excess vinaigrette from the pan!). It is important that the hot ingredients contact the kale quickly to soften the kale.

Mix everything together vigorously, making sure that the warm vinaigrette gets into the grooves of the kale. Garnish with the dried cranberries, pickled red onions and the remaining Parmesan and serve immediately.

Place the butter in a small pot over medium heat until it begins to separate and the solids caramelize to golden brown. The foam should almost be gone. Carefully add the cream and pepper, and cook until the cream splits and the solids have caramelized to golden brown. The cream will boil vigorously when added. Add the lemon juice and bring to a simmer. Add the milk and bring to a simmer. Remove from the heat and set aside until it is cool to the touch. Place the cooled mixture in a blender with the oil and blend until smooth.

More news, fewer ads, faster load time: Get unlimited, ad-lite access to the Vancouver Sun, the Province, National Post and 13 other Canadian news sites for just $14/month or $140/year. Subscribe now through the Vancouver Sun or The Province.

Which Treatments Will Still Work for New COVID Variants?